Ode to a Ring Sling

When Wallace was 5 months old, I was given a hand me down Maya ring sling. A friend showed me how to use it and pronounced me a natural when I popped a boob in Wallace’s mouth and he fell asleep in minutes. 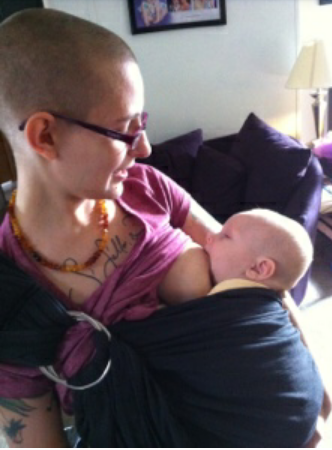 A rare picture of us taken by someone else.

It was an immediate game changer for us. I had been able to nurse him in a Mei Tai and an Ergo but those both had him in a verticle position and a light sleep. The ring sling allowed me to cradle him supported for the first time and really get him sleeping.

It also provided him with the comfort of the swaddle and helped me slowly transition him away from it. Every evening was a struggle to get him to sleep, set him down, and sneak away to get a few things done. With the ring sling, I gave up on that. I got us both ready for bed, nursed him to sleep, and then I could move around with him in the sling while I packed our bag for the next day, ate dinner, and went to the bathroom.

At six months, we finally experienced my first let down of milk thanks to this ring sling. Before that, he had to work hard for every drop of milk. One nap time, I just decided to let him stay latched on in the ring sling while I sat and read. After an hour, I would take him out, switch him sides, and give him another hour or so on the other side. He didn’t nurse the whole time, sometimes he unlatched completely, but for the most part it stimulated my breasts to keep making milk. After a few days of this, the better sleep was really apparent for him. Then, the miraculous happened. He was nursing and all of a sudden started swallowing fast and loud. His eyes popped open in surprise.

Eventually, he started getting multiple letdowns in one hour of nap, then letdowns right away with nursing. It really was amazing. I had told the IBCLC we had worked with before that I didn’t think I was having any letdowns. She thought that I meant that I just couldn’t feel them and dismissed my concern. Now I had proof because I was finally having them!

To put it succinctly, that ring sling saved our breastfeeding relationship. We probably wouldn’t have made it to a year, let alone 20 months with no sign of stopping.