It has been eight weeks since we night weaned. I’m so glad we did and that it worked. His sleep is by no means ideal but it is leaps and bounds better. I think my breasts have adjusted for the most part but my sleep hasn’t.

He still wakes a few times a night and will ask for tatas usually the final time around 5am. When he needs help falling back to sleep I either stand with him and rock with his head on my chest or he will lie down in bed with me. One night he slept almost ten hours in his bed without needing me! He was pretty restless and I couldn’t sleep because of my migraine but at least I know he can do it.

A typical bedtime for him is around 7pm. I nurse him to sleep and get him into his bed by 7:30. He seems to typically wake between 12 and 1 and 4:30 and 5:30. Sometimes I can give him his water bottle and he will fall back asleep easily. The 5am waking is the worst though. He thinks he wants to get up despite being really tired still.

I did some internet searching on early waking toddlers and actually found some helpful things, though I didn’t save the links. One big one was that his nap was too early so he was over tired by bedtime. It said to have four to five hours between when he wakes from nap and when he is expected to go to sleep. With his nap typically 11/11:30-1:30, that was making his bedtime close to six hours after his nap ended. I started pushing his nap to noon and his naps have gotten better and longer (but he still nurses and suckles the last half of his nap, ugh). I am hoping this will help his mornings shift and I have had a little success with that so far.

My latest addition to this web of sleep and breastfeeding is to not nurse him to sleep for the night. I have tried this before and it was a disaster, but now he is used to falling asleep without tata! Last night wasn’t horrible but not great either. After having nursed both sides twice, beating up my boobs in the process, I told him he could either fall asleep in his bed or in my arms rocking and that tatas were sleeping now. He fell asleep about 8:30 after much up and down and back and forth. I’m hoping tonight is easier. 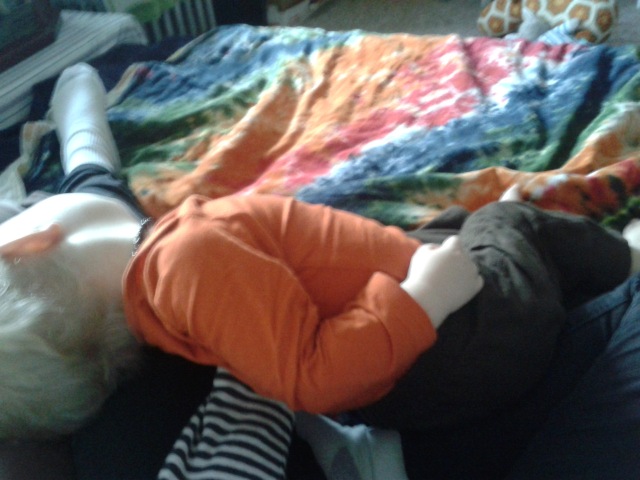 The last bit of his first 3 hour nap.