One of the things I knew way before I became a mom is that I would let my child, and any I have cared for over the years, play with whatever age appropriate toys they wanted regardless of its supposed gender designation. There are not boy toys and girl toys. Pink toys and a lack of interest in team sports will not turn a boy gay and I clearly wouldn’t care if he was. 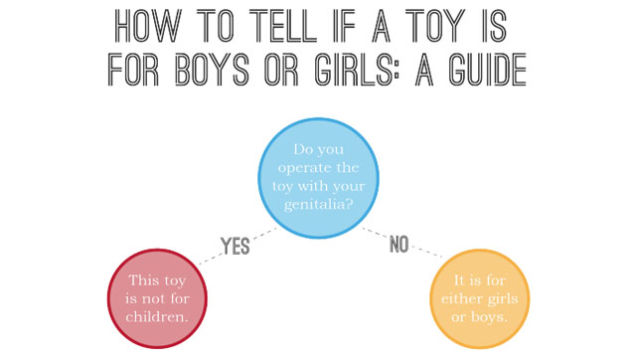 There are tons of already gender neutral toys like play kitchens, blocks, and  puzzles that it baffles me why there have to be hyperfeminized versions of each next to the bolder or neutral options. Why does everything have to be plastered in pink and frills in order for a girl to play with it? It didn’t used to be that way and is just a marketing scheme aimed to make parents buy more stuff.

I have heard of parents, often times fathers, refusing to allow their sons to play with kitchen sets, dress up toys, or baby dolls. All of those things come in non hyperfeminized versions. An uncle of mine, and father of five, commented about getting Wallace into sports and lots of boy things. I don’t think he was joking.

Before Wallace was born, I started finding good basic toys at garage sales and thrift stores while searching for baby clothes and books for myself. I found a wooden shape sorter, stacking toy, and airplane as well as duplos and dolls from my own childhood. I started making felt play food and putting a few things on the shower registry. I was trying to keep it neutral and developmental because he wouldn’t have opinions on these things for a couple years.

For his first birthday and Christmas, I was proud of my family and friends for not going crazy with stereotypical boy toys or overly commercialized products from shows and movies (seeing as we don’t watch TV). He did get a lot more trucks and blocks than I think he would have if he were a girl so it is good he seems to love all things vehicular. He also didn’t get anything thought of as for girls.

Now that he is 2 and full of opinions, I like seeing what things he gravitates to. He was obsessed with a dog purse, replete with pink sequins, at a house I worked at so I got him one when I saw it on sale at Target. His current favorites at home are trains, garbage and dump trucks, cars, and little people animal sets. I don’t mind that he is really into these toys because they are his genuine interests and a stereotype reinforced by marketing, peers, and people he looks ups to.

I try to let him choose any age appropiate toys but with toys segregated by gender designation in stores, it means walking through all the aisles. It can be hard to steer him away from toys that are above his age level or include things I won’t buy like weapons or things from TV shows. I was glad to read today that Target will be taking down gender based signage in their toy and decor sections. If they rearrange by age level and toy type that would make shopping with a little kid so much easier.

I know he will encounter people telling him he shouldn’t like or play with something because he is a boy. I hope to instill in him a strong sense of self and the ability to make his own choices regardless of what color the packaging is. Though I doubt he will ever beg me for a princess doll, he may find himself needing to stand up for a friend who does.

Single mom by choice, lesbian, natural living, parenting, car free, Chicago.Thank you for reading and feel free to leave a comment!
View all posts by JennP →
This entry was posted in LGBTQ, Linked Up, Parenting and tagged gender, toys. Bookmark the permalink.

16 Responses to Raising a Boy: Toys